on 4th of November 2021, Via a Notification No 377 Jammu and Kashmir administration(
Civil secretariat Finance department) issued an order which read:

In exercise of the powers conferred by section 3 and 3A of the Jammu and Kashmir Motor spirit and Diesel oil (Taxation of sales) Act, Samvat 2005 and in suppression of all the previous notifications on the subject, the government hereby direct that tax and cess on sale of motor spirit (Petrol) and Diesel Oil) shall be leveid at the rates as shown below against each in column 3 an 4 of the table.

This notification shall come in force with effect from 4th of November 2021, by the order of the government of Jammu and Kashmir.

on the order hand 22 states in India have reduced VAT on petrol and Diesel.

Following the centre’s decision to reduce the excise duty on Petrol and Diesel by Rs. 5 & Rs. 10 respectively, the central government had stated in an official release that 22 states so far have reduced the VAT on petrol and diesel, and 14 haven’t.

The most reduction in the Petrol prices has been in Karnataka, followed by Pondicherry and Mizoram. The prices of Petrol in these states have come down by Rs 13.35, Rs 12.85 and Rs 12.62 respectively, the release further added.

For Diesel, the most reduction has been undertaken by Karnataka, leading to price coming down by Rs 19.49 per litre, followed by Puducherry and Mizoram.

The tax cut follows an unrelenting hike in international oil prices pushing pump rates across the country to their highest-ever levels.

While petrol soared to above Rs 100-a-litre-mark in all major cities, diesel had crossed that level in more than one-and-a-half dozen states. 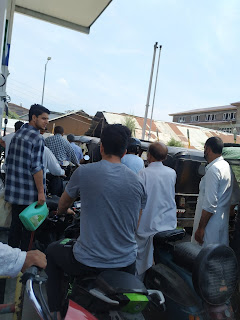 The total increase in petrol price since the May 5, 2020 decision of the government to raise excise duty to record levels had totalled Rs 38.78 per litre. Diesel rates have during this period gone up by Rs 29.03 per litre.

The relentless increase in fuel prices had been severely criticised by Opposition parties, particularly Congress which had demanded that the government reduce its excise duty.

Based on April to October consumption numbers, the loss of revenue to the government due to the excise duty cut will be Rs 8,700 crore per month. This totals to an annual impact of over Rs 1 lakh crore, industry sources said. For the remainder of the current fiscal, the impact would be Rs 43,500 crore.

Data available from the Controller General of Accounts (CGA) in the Union Ministry of Finance showed excise duty collections during April-September 2021 surged to over Rs 1.71 lakh crore, from Rs 1.28 lakh crore mop-up in the same period of the previous fiscal.

After the introduction of the Goods and Services Tax (GST) regime, excise duty is levied only on petrol, diesel, ATF and natural gas. All other goods and services are under the GST regime.